2022 seems to be a year of on-going crisis: the continuing COVID 19 pandemic, the war in Ukraine, an imminent energy shortage and the growing threat of climate change hold the potential to change our ways of life for good. What role will art and the cultural sector play in a world of changing values and endangered democratic freedom?

To explore the meaning of “art” and “freedom”, the group set out on a trip to art hotspots in Goch, Bedburg-Hau and Groesbeek that stand for very different approaches on the matter. The two-day trip started with a visit to Museum Goch where curator Steffen Fischer welcomed the group with a guided tour through the museum’s recent exhibition “Die Kunst sucht sich ihren Platz” on the collection of private collector Hiltrud Neumann. Neumann’s collection focussed mainly on local artists from Mönchengladbach as well as artists from the Rhineland. The title of the exhibition refers to Neumann’s flat in Mönchengladbach-Hardt that became an exhibition space in and of itself with over 3.500 works that she acquired over the course of 40 years - each item a careful pick in the context of both limited finances and space. As her collection grew over time, what started out as a private hobby became more and more a responsibility that she felt to support and connect artists through her collecting and networking activities.

The title of the exhibition suggests that art can and will find it’s own place – with surprising outcomes. 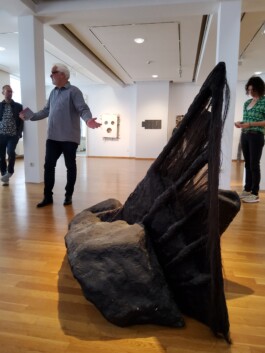 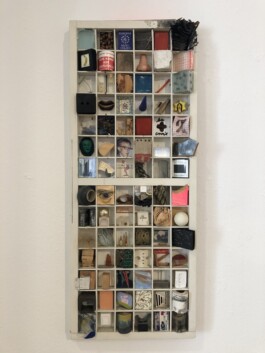 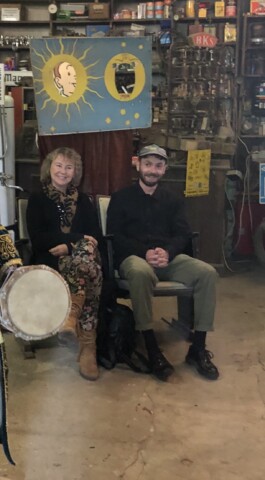 Such a “place of surprises” was next on the Borderlanders’ tour: the metaphorical labyrinth of Viller Mühle in Goch, where collector Heinz Bömler showed the group objects of his collection not of art, but of historical items, ranging from antique toys to household goods to advertisements, road signs, furniture and much more. Most of the shown exhibits date back to the 20th century. 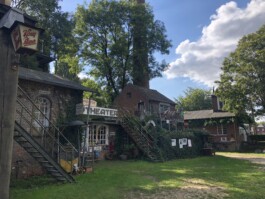 Both Neumann and Bömler created unique spaces that tell tales of time gone by. But how can they connect to modern times and a changing world? Museum Goch approached that dilemma by not even trying to replicate Neumann’s unique flat but by presenting chosen art objects outside of their original context for the first time in over 40 years. Viller Mühle has not yet made that next step. Both cases show that sometimes, focussing on artefacts of the past holds the danger of disconnecting from the modern world – and thus creates an unsolvable dilemma for those who try to preserve.

This was also impressively shown at Museum Schloss Moyland in Bedburg-Hau, the last stop of the day. Museum director Dr. Antje-Britt Mählmann showed the group around the museum which holds an extensive collection of works and private possessions of Joseph Beuys. Being born in Krefeld and having realised his first exhibition in Kranenburg, Beuys spent many years of his life and career in Kleve and Düsseldorf. Today, he is often associated with liberating art from old-established systems, expectations and an elite circle of artists, teachers and critics. But instead of just paying homage to the legacy of Jopseh Beuys, Museum Schloss Moyland transfers Beuys claim “every person is an artist” into real-life practice by turning exhibition space into studios for young visitors and by, for the first time since its opening, correlating the Beuys collection with new exhibits. 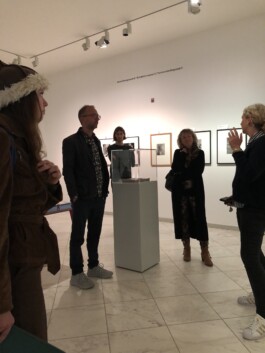 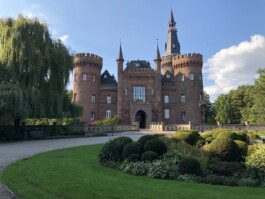 The next day, the idea of “liberation” was put into another context entirely. After an overnight stay, the group visited Vrijheidsmuseum in Groesbeek. Director Wiel Lenders gave a tour through the museum which had been re-opened recently after a period of reconstruction. The now fully sustainable building presents a multimedia exhibition on freedom in general, but more precisely on the liberation of the Netherlands from Nazi German occupation. It uses tools of multimedia storytelling such as installation and video, thus connecting visitors to the everyday life during World War II. In interactive installations, dilemma situations based on real events give visitors a glimpse into the complexity of surviving war. In short videos, characters are introduced that lived during German occupation from 1940 to 1945. They are faced with difficult decisions that often hold the potential to determine either individual and collective freedom – or imprisonment.

Vrijheidsmuseum confronts its visitors with situations of difficult decision making. In a moderated panel discussion that followed the guided tour, the group discovered that the dilemma that the exhibition confronted them with felt relatable to many topics of living and working as an artist today. Questions were raised if contemporary art should partake in discussions on political subjects such as climate fairness or democratic freedom. Some artists raised the opinion that, if they did not consider the challenges of the modern world, there would be no point in their artistic work at all. While most agreed with this position, there remained the question whether art will actually be treated as a valued and respected agent in political and social debates. And if it is not treated as such – where lie the reasons for that?

With some answers found but many more questions raised, the field trip became an inspiring two days for the whole group. The relationship between art and freedom remains a very personal one for each artist. But to be working and living freely, not only as an artist, but as an individual in a democratic society, is as much a privilege as it is a human right.

The next field trip will lead the Borderlanders to the area around Garzweiler open pit mining and to Heerlen, where the team of Greylight Projects will open their doors to the euregional visitors. We would like to thank everyone who contributed to “Art and Freedom” and look forward to “Art and Underground” on October 26th and 27th.